Our previous blog post called for more than the recommended 30 minutes of daily exercise for people with inactive jobs or inactive lifestyles. Our campaign against inactivity goes on, today representing a study by an Australian research group. The findings concluded that each hour you spend sitting in front of the TV reduces your life expectancy by 21.8 minutes – ten minutes longer than a cigarette. 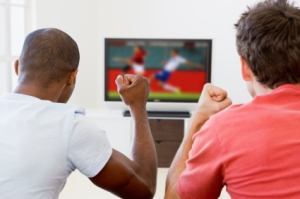 The study, lead by J. Veerman at the University of Queensland, was published in The British Journal of Sports Medicine. Data from 12000 Australians was collected by a national survey on diabetes, obesity and lifestyle. The respondents answered questions about health, diseases, exercise, smoking, dietary habits and hours of watching television per day.The goal was not to measure time in front of the screen specifically, but get a ballpark figure of the amount of hours a person spent sitting. With these data in hand, the researchers tried to isolate the factor of risk posed by long stay seated for other unhealthy habits like smoking and not exercising. Their conclusion was that adults who spends six hours a day sitting in front of TV, lives nearly five years less than persons who do not watch television.

Interestingly, another study on the same subject was published this fall by a British group in the scientific journal Diabetologia, and reviewed 18 studies – total 794,577 individuals investigated – that took into account not only the period in which the person remains seated in front of the TV, but also the time sitting at work. The authors showed that adults on average spend between 50 and 70 % of their day sitting. Furthermore, the study showed that people who spend more than seven hours a day sitting have a 112 % increase in risk of developing diabetes, 147 % in risk of cardiovascular disease and 49 % in risk of dying prematurely even if they exercise regularly.

So, the take home message is: spend less and less time sitting and exercise more! It’s just as simple as that. We will write more about this topic the coming weeks, and you can also find tips for exercising in previous blog posts.