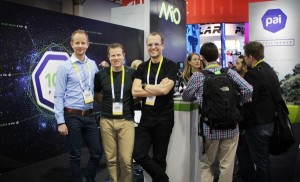 Close to 175 000 attendees, including 6000 journalists, visited to the worlds largest convention for consumer electronics, CES, last week in Las Vegas. Among them was head of CERG, professor Ulrik Wisløff, who together with Canadian wearable company Mio Global introduced PAI, Personal Activity Intelligence to the worlds technology press.
PAI is a result of research based on the HUNT study where more than 60 000 individuals has been monitored over a period of more than 20 years. The goal is to make PAI the new world standard of activity tracking. PAI is an individual metric that makes sense of measured heart rate data, and significantly reduces the risk of lifestyle related diseases.
Read also: A Revolutionary Metric System to Help Your Lifestyle – CERG research in new Fitness app

A first version of the PAI app was released during CES. PAI will have it´s main launch later in 2016, together with the release of Mio Slice, the first wristband heart rate monitor that will have PAI fully integrated. The groundbreaking new concept was presented in Las Vegas on Wednesday, and Stuff Magazines announced Thursday Mio Slice including PAI as one of the winners of  “Wearable Tech Award of CES 2016“.
Read also: Mio Slice with PAI named as Best Health Wearable at CES 2016 of PC Mag
«This is an important step toward reaching our goal of setting a new world standard of activity tracking,” says Lasse Berre, CMO of Beatstack, the company that has developed PAI over the last two years, «it is great to see that research from Trøndelag and NTNU now is on it´s way to have an impact on health around the world.»
Read also: Senior Olympics – Aging and fitness
Also present at CES was Christian Gutvik, CEO of Beatstack, representing NTNU´s Technology Transfer Office. «PAI is a great example of how innovation based on NTNU research can lead to technology having major international impact. This is truly an extension of NTNU´s vision of ´knowledge for a better world´», Gutvik says.